New poems, collected and edited by Miriam Owen Irwin. This tiny book contains nine new poems, written just for this little book. These poems are about the birds themselves, not as symbols to say something else. Marj Westhaver wrote Red Tailed Hawk. White Owl is by Vivian Scarpa, Mirage II by Doris Henke is about a flock of blackbirds. Goldfinch is by Bernice Coca and the Robert Lanzit wrote Great Blue Heron. Jay is by Miriam Irwin, Hummingbird and California Quail, both written by Robert Hoeft. Finch is by Dorothy Gleason. Both editions have combed end papers by Peggy Skycraft made to resemble a blue jay’s feathers.   $24 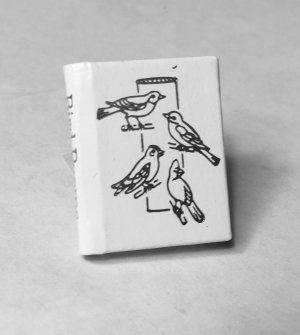